Cambodia is a country where the real estate market seems in turmoil. On one side of the housing programs, with prices of around $ 2,000 / m2, but that does not appear to be intended to Cambodians. On the other houses in traditional character, brick, for Cambodians. (6)

The standars accommodation is composed of 40m2 4.7 occupants. Moreover, only 15% of dwellings are built of concrete, cement and few of them have water, electricity or toilet. (6)

In 2013, 78% of the population lives in rural areas. Only 5% of habitats are made of hard. Cambodian houses are generally of poor quality wood and corrugated iron. They measure between 20 and 60m2. (6)

Since 1993 – Article 31 of the Constitution : The Kingdom of Cambodia shall recognize and respect human rights as defined in the UN Charter, the Universal Declaration of Human Rights and all Treaties and Conventions relating to Human Rights, Women and the Child. (1)

The Law on Concessions of 19 October 2007 – Article 1 – aims to promote and facilitate private projects in Cambodia to ensure the public interest and the achievement of economic and social objectives of the country. (6)

The sub-decree on Social Concessions No. 19 ANK / BK of 19 March 2003 – Article 2 – is a transfer mechanism of the private property of the State for social reasons to poor lacked land to reside or to make subsistence farming. (6)

Since the early 2000s, about 400,000 Cambodians were forced to leave their land after granting the government vast areas to private companies operating plants. More than 22% of the country, 4 million hectares, is controlled by these groups. The government says their grant forest areas for the purpose of economic development. Cheam Yeap, a member of the party of Prime Minister Hun Sen (Cambodian People’s Party), defended the government’s policy, as quotidient The Cambodia Daily. Faced with the discontent, the World Bank in late 2011, suspended funding for some projects. The UN rapporteur for human rights in Cambodia, Surya Subedi said that the principle of concessions leads to “frequent and serious” abuses. (2)

A report dated 2011 and directed by ADHOC, reflects the situation of housing rights and land as well as the phenomena of mass evictions taking place in the country. (3)

However, a law concerning expulsion for public utility exists since 2001 (Art. 4 of the Act on Property), in 2010. A thorough procedure is therefore set point by several steps. However, the associations for the defense of human rights criticize 16 items out of 39! The dispute relates in part to the fact that the whole procedure will be under the responsibility of a committee of government representatives only. (6)

Part of an article in the Courrier International 28/02/13: Cambodia More likely to be driven from their land or their homes, Cambodians reinvent forms of bold challenge. (2) 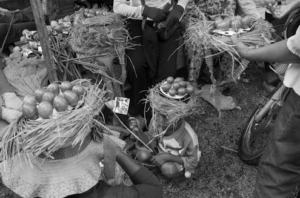 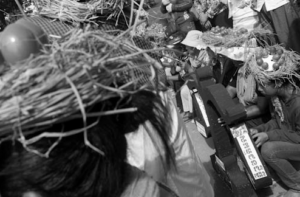 “In Phnom Penh, threatened people wear a hat symbolizing their nest on their right to decent housing.”

In October 2012, the sight of protesters Borei Keila and Boeung Kak (two districts of the capital Phnom Penh, whose inhabitants were expelled) packed like animals in a tiny cage in front of the Ministry of Justice drew Rathana attention. Generally, protests let this 22 year old student indifferent. “All these events bore me, she said, but this time, I must say that I was deeply impressed.” (…) According Chhiv Kek Pung, president of the Association Licadho, the problem of land concessions has led to specific community organizations and experienced. (…) According to Lao Mong Hayn other independent political analyst, protesters demonstrate daring and ever more creative approach to the legislative elections, scheduled for next July. “People have become more innovative and vigilant, he said. Few months ago, the residents of the neighborhood of Boeung Kak took off their top. People are better informed about this kind of civil disobedience. I think it will be used more often ” When protesters marched in Phnom Penh on October 7, with miniature houses on the head, the spokesman of the municipality, Long Sunday accused the residents to become professional event. (…) (2)

From 1975 to 1991, the land was completely destroyed , first by the Khmer Rouge and the Vietnamese occupation and finally civil war. In 1992, the state put in place a comprehensive reform to issue land titles. But the requests were so numerous that the new Department of Land Affairs was overwhelmed. Difficulties in obtaining satisfaction encouraged people to use corruption at all levels. Members of the ruling party beneficiaries widely while the poorest, lacking financial resources, including bad law and is not a party member, were more difficult to obtain these titles. (4)

The Cambodian government, with the help of the international community, put up another reform in 2001. This reform was to establish a committee of independent cadastre, to settle disputes and to issue certificates property. The Land Law then recognizes three types of land ownership: the public or private state and private property ownership. But because of corruption, the reform was a failure. (4)

According to a UN report, the point of the most misused law is indeed an opportunity for the state to lease state private land through economic land concessions (CFE) for a maximum period of 99 years. While the purpose of this provision was to enable people to acquire vacant land, these sales have mostly to foreign private companies or important economic or political figures in the country. They go around the same time the limit of 10,000 hectares of concession by buying adjacent land through different companies. (4)

Cambodia since the adoption of the Act 2001 on land ownership, which allows the state to allocate land in the form of “economic land concession” 2 million hectares – is 56% of arable land – passed into the hands of private companies. A video testimony to discover the phenomenon of land grabbing that is accompanied by phenomena of mass evictions of populations. Video in FR (5) 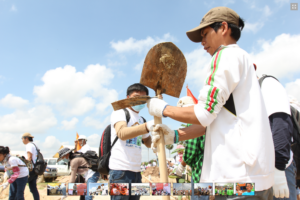 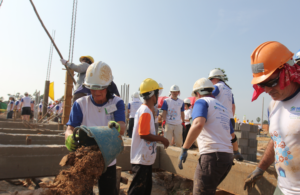 MARKET acquisitive: 93% of Cambodians were homeowners in 2011 (80% of owners in the city of Phnom Penh)! The question of title still does not seem resolved (see section on land law). The title received by the family will initially be a title of “possession” which will be converted to ownership after five years of occupation without challenge. In 2011, there were 1.7 million title issued on the $ 4.5 million requested for 1989. These titles are easier to acquire in rural and urban areas. (6)

RENTAL MARKET: 3% of Cambodians were renters in 2011 (13% of tenants in Phnom Penh). Act 2001 provides the legal framework of the lease (art. 106 to 113), although many gaps still exist and would require legislative supplements. (6)

THE CONDOMINIUM: This property status exists in Cambodia since 2001, but it seems to have been especially devised to support major real estate projects that were being built. These projects are large towers with ground floor partly common. But this settlement pattern does not exist in Cambodian culture, where a dilapidated building due to lack of financial resources, but also the lack of a trustee in charge of the management of these areas. There is therefore the story “pirates” and squats on rooftops. (6)

The study of Damien Le Nourichel gives a series of figures on housing costs, income residents and housing types to which they have access based on their income. 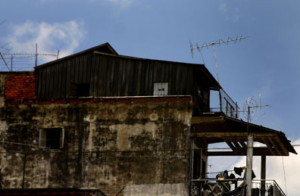 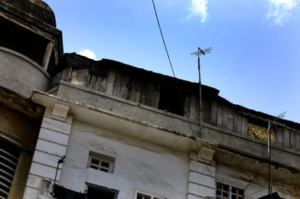 Phnom Penh is known for slum on the roofs of buildings. Thus a city is above the rest of the city. Phnom Penh is a growing city: every year 3000 new informal settlements emerge.

There are only two entities in charge of planning: the planning department in Phnom Penh (DATUC) and the Ministry of Land (MATUC). There is no planning department in other cities. Depending on the size of the construction project, one or the other service is responsible. But there are tensions or competition between these two services. (6)

The Construction Law developed in 1989 is now considered obsolete, why nobody respects the text. It is true that his goal was to help to restore the Cambodian cities with their original character. (6)

There is great uncertainty about what belongs to the state or not. Section 15 of the 2001 Act shows that the state has “the soil, the subsoil, the mountains, the sea and submarines, the ribs, the air space, (…)” In short, ‘Cambodian state has a definition very (too?) off that encompassed the public domain. (6)