A museum of traditional housing offers a museum built after a movie: Video habitat traditional

Its Section 28 states that:

1. Every child has the right to housing.

The South African Constitution (Sections 7 and 8) also provides that the State has an obligation to respect, protect and fulfill the right to housing, which applies to all branches (executive, legislative and judicial) and all levels of government (local, provincial and national levels).

2 – History of the Right to Housing

At the end of apartheid, the objective of the new government installed (1980) was to provide the population “permanent residential structures with secure tenure, privacy and adequate protection against the elements ”. (in Housing Subsidy Scheme department of Housing, Pretoria, 1995, 222 p.)

The right to housing is a recognised prime need for every human being. Different laws of countries, treaties and charters promote and protect this right. Housing crisis is a subject that requires special and professional address towards permanent and satisfactory solutions worldwide.

In this perspective, the International Covenant on Economic, Social and Cultural Rights (ICESCR) prone the obligations of the states to assure that human rights (the right to housing included) of the people are promoted in accordance with the principles contained in the Charter of the United Nations. Signed twenty years ago, this covenant, was only ratified earlier this year by South Africa. In addition, the Constitution of South Africa provides for everyone accessibility to adequate housing and no one to be evicted prior provision of an alternative accommodation.

Yet, affordable accommodations are currently scarce in South Africa and particularly in the inner-city of Johannesburg for mid and low class residents. The reasons could be attributed to overcrowding and jobless in the area. In fact, about 23000 under resource people earning less than R 800 a month live in very bad conditions with inadequate services. (Anna Cox at the inner-city evictions summit, 09/11/15). The private sector is delivering housing for those earning between R1 500 and R2 000. (Johannesburg Development Agency consultant Andreas Bertoldi at the inner-city evictions summit).

In the light of the previsions of art. 26 of the Constitution of South Africa, majority of under resource communities residing the inner-city of Johannesburg are denied their right to adequate housing and basic services.

This can be verified looking at two different aspects namely :

1 – The city responsible provider of the housing for its residents

At the inner-city evictions summit, Mayor Parks Tau said that: There are people who can afford to pay and they should not be hiding behind the poor. They should be paying rent and making their contributions to assist the poor, who often, because of their financial circumstances, cannot afford to pay,”

The reality on the ground is that the growing demand of accommodation is far above the supply available in terms of allocated lands and financial limitations in the inner-city of Johannesburg. The population is composed of multi-racial residents who come from all over the world in search of better conditions of living. Their focus presence in the area engenders the raise of joblessness, the dilapidation of buildings due to overcrowding and difficulty to maintain.

The city of Johannesburg, as representative of the Government’s target is to construct some 16000 affordable units in the short to medium term in order to resolve the problem of accommodation in this area. (Inner-city evictions summit). The city bases its concern the National Building Regulations and Building Standards Act 103 of 1977, “which concerns the City’s ability to exercise its statutory powers and duties to prevent dangerous living conditions in its area of jurisdiction”. (5)

However the problem is not solved but it becomes more and worse. The number of the jobless people living in bad buildings expands on a daily basis. The conditions of living are unacceptable and stimulate serious wealth concern.

2 – Alternative accommodation in the inner-city of Johannesburg

“Every month, the City receives 300 eviction applications. At present more than 5 000 residents in the inner city and surrounding areas are facing evictions’. The city has identified 1000 buildings to be renovated and converted into temporary accommodation for evictees, as required by the law. (Inner-city evictions summit)

The condition of living in the “bad buildings” is conducting the city to evict the tenants and relocate them elsewhere. Yet, the relocation is not welcomed favourably to evictees who prefer their current places near to all facilities such as schools, hospitals, shops and job places. Residents of the inner-city request houses in the inner-city where they are happy to live near all their main activities.

Residents in those buildings who primarily were tenants become unlawfully occupiers in the views of the owners and the city when the building deteriorates. (City of Johannesburg Metropolitan Municipality and Others v Hlophe and Others (1035/2013) [2015] ZASCA 16; [2015] 2 All SA 251 (SCA) (18 March 2015))

This proves sufficiently that the city is falling to provide temporary accommodation where conditions of living are adequate for the residents of the inner-city of Johannesburg.

By ratifying the ICESCR, South Africa undertook, not only to provide adequate standard of living for the people, but also to assure the continuous improvement of conditions of living for them as enshrined by the provisions of art.11.

However, the reality on the ground is showing an opposite picture of what was meant to be. Living conditions in the bad buildings are deteriorating and alternative accommodation are not properly managed to remain temporary. It is time that South Africa “take appropriate steps to ensure the realization of this right, recognizing to this effect the essential importance of international cooperation based on free consent.”(Art. 11 ICESCR)

The Johannesburg Social Housing Company (JOSHCO) was introduced to the people as they were going to come up with a solution to housing issues in Johannesburg inner city and to the shortage of accommodation also to take into consideration the low incomers and people who doesn’t have permanent employment in the city of Johannesburg.

But looking at the requirements needed in order to get a place in these flats owned by these companies are way out of people who are not working, it not easy for a person to have a three(3) months bank statement while he/she is not working, what would reflect on it?

Not to talk of a payslip, those are things which leads to having only people who are high earners renting those flats because they can afford. A person should earn R2000 to R7500 per month, if not its means there is no place for you in the inner city.

This lives people not having a descent place to stay which they can afford, it also pushes people to occupy the buildings which are empty in the city of which they end up calling it home. Not knowing when they will be evicted as the processes of evictions are excluding the occupiers.

It has been many years whereby the City of Johannesburg was evicting the occupiers of “bad building” in the inner city because of health and safety concerns and its broader Inner City Regeneration Strategy. The City evicted thousands of people who could not afford market rates for housing. For example, in 2006, occupiers of two buildings in Berea and Hillbrow teamed up with

the Inner City Resource Centre (ICRC) and human rights lawyers to resist their eviction and request suitable alternative accommodation in the area. In 2007, the Olivia Road case went to the Constitutional Court, which ordered a process of “meaningful engagement” between the occupiers and the municipality.

From then the occupiers were given alternative accommodation to nearby place and they are still living there. Why is this case case important?

However, this stopped for a short period of time as evictions continue to happen and none of the people are taken into consideration by the municipality.

People are also tired of being evicted, on 29 September 2015, after occupiers has been evicted by the Red Ants in the building situated in Jeppestown, moments after they were kicked out the building was set on fire.

In this case we talk of families including children which were not catered for while Section 28(1)c of the Constitution of the RSA says every child has a right to basic nutrition, shelter, basic health care services and social services. http://www.timeslive.co.za/thetimes/2015/09/30/Fire-razes-buildings-as-Red-Ants-carry-out-evictions#

The black population was located in neighborhoods racially separated (Group Areas Act) consisting mainly of informal settlements, either in formal constructions known as townships. The Group Areas Act: the government of the day wanted the blacks away as possible from the cities. They could not reach the city with a work permit, the city was planned according to a logic racial and economic status of residents was precarious. Indeed, black people did not have access to the property before the 80s and could not get a very specific term rental (10 years and 30 years). The townships are initially sparse spaces and undiversified, therefore do not offer the benefits of urbanity.

In 1950, the Group Areas Act divided the city along racial lines: white city on one side, the other townships. These townships included standardized houses (the Matchboxes) in streets very uniform. The government has built many houses of this type between 1950 and 1967, and wanting to fight against the informal settlements.

Then the South African government has embarked on the construction of homelands, but these units have had little success. The matchsboxes have continued to develop and the first informal housing in the form of backyard shacks (precarious constructions backyard) and squatter camps.

The end of the apartheid government marks the end of the policy of urban construction. Thus, in the late ’80s squatter camps have become increasingly numerous, showing the severity of the housing crisis.

The Housing Subsidy Scheme: the end of apartheid has brought South Africa in transition. In 1992, the National Housing Forum (NHF) is created and aims to restructure the institutions that operated in the apartheid era, offering new directions. However, the phrase “a family, a site” tends to promote urban sprawl and make cities viable apartheid, rather than radically transform the structures of the city.

The country lacks more than one and a half million housing units (1998), the legacy of apartheid policy and reinforced by the lack of resources for people. The historical past of the country (apartheid) explains urban imbalances leading to major problems of urban planning. 7 million people live in informal settlements with little infrastructure.

Example of informal Housing in Shantytown (thesis of S. Matheson)

The government’s goal is to formalize informal settlements (2700 informal settlements identified in the country). The Breaking New Ground – BNG – aims to eradicate this type of housing in the shortest possible time. This policy aims to develop social housing, provide services Ingénieurie and amenities such as schools – clinics – shops.

«Social Housing is a rental or co-operative housing option which requires institutionalised management which is provided by accredited SHIs or in accredited social housing projects in designated restructuring zones.»
Source : http://www.shra.org.za/

1990 … The new housing policy was designed to be the cornerstone of this new inclusive government. Despite good intentions, it does not start.
2002 … creating NASHO, Federation of Social Housing Companies that conducts research, training, lobbying … and restarts the social housing policy by saying that it will contribute to urban regeneration. 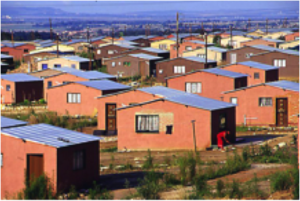 Several grants are available to people: