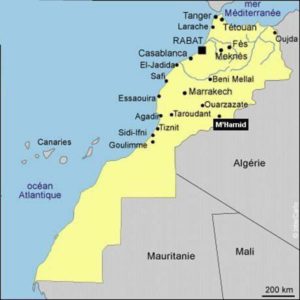 The new Moroccan Constitution (2011) enshrines the right to housing in Article 31:

The state, public institutions and local authorities shall work to mobilize all means available to facilitate equal access of the citizens to conditions that enable them to enjoy the rights :

health care – social protection, medical coverage and mutual solidarity or organized by the state – a modern education, accessible and quality – education on attachment to the identity Moroccan national constants and immutable – the training and physical education and art – a decent housing – at work and government support for job search or self employment – access to public office based on merit – access to water and a healthy environment – sustainable Development.

The LEASE seems to protect the tenant more than the landlord, which also results in a low percentage of landlords. In popular circles, by cons, lease or sublease is fairly common as a way to supplement household income.

The UNSAFE AREAS OF HABITAT are often affected easements that require their reduction or restructuring. These easements are binding legal effect to the state, which does not promote security of tenure for occupants.

In Morocco, the term “anarchic habitat” refers to the slums. There are no official figures or nationally or regionally in the number of evictions ! Evacuations derelict buildings are made in a legal limbo, not allowing to obtain such data.

It is governed by two regimes including the registration that covers only a small part of the land holdings. The complexity of land issues prevent the development of a consensus among stakeholders to adopt new legislation that would implement new land agencies and legal arrangements.

Developments in the non-regulatory part of the purchasers of lots in their rights as mother to conservation land. They become purchasers of undivided land. Unfortunately, this process tends to create a fragmentation of growing regulatory and non of these plots, the benefit developers at the expense of buyers and communities. Some households have no title.

Although Moroccan law does not allow the sale of agricultural areas, the Moroccan government provides in the form of leasing its land to private investors. The stated objective is to boost the efficiency of the areas that the state is not able to handle effectively. A national agency, the Agency for Agricultural Development (ADA), which is responsible for carrying out these transactions.

Moreover, Morocco is among the countries which today are investing heavily abroad. For example, in 2013, in Gabon Moroccan investors can “buy” land.

More than one in two households in urban areas and about 85% of rural households are homeowners, this is also the result of public policies in place. According to figures collected, nearly 10% of households housed “free” in both urban and rural areas. The most vulnerable are often owned their shack or shanty while the location is rather restricted to two social classes:

However, the status of ownership, even with a title, does not immune from deportation.

There are few tenants in Morocco: less than 6% in rural and 30% urban (2004) and especially in the urban centers. This percentage also varies with the tenure and type of housing. There are, for example, rent in popular circles with cases of cohabitation.

The housing stock in urban areas shows a significant increase, especially between 1994 and 2004. But this increase is less than that of household growth, which should ultimately reduce the pressure of demand in cities. It seems that we are in a period of stabilization of supply and demand, however, if one takes into account also the supply of substandard housing.

A large fleet of empty dwellings is found in Morocco, reaching almost 15% in the cities, which represent five years of housing production “regulatory”! This is to liaise with the housing shortage is also found. According to a recent study on the right to development in Morocco (2010), it seems that the industry has been very active between 2003 and 2007, with significant housing production allowed. However, the housing deficit remains high, with a new demand of about 120,000 households per year. This deficit is estimated at 600,000 units!

There are 3 different forms of habitat regulations (authorized) in Morocco

In Morocco, about 1.4 million people live in SLUMS near 1000 which is located on the third axis Atlantic Kenitra-Casablanca. And he even construct, on average, per year 4000 barracks. This is a result of the supply of housing unsuited to a part of the population, often the most destitute. The failure of the rental market for low-income families, their financial inability to purchase plots in eradication programs implemented by the state and the inadequacy of the products delivered with models and social realities reveal now a large fleet vacant. Source: HIC article.

During the Forum in Tunis in 2013, the Moroccan for Decent Housing Network explained that two major events are the basis of the large number of people living in informal settlements in Morocco :

The work of this network is more difficult than powerful lobbies want to transform the use of green areas in their favor, without protecting the environment or the less fortunate citizens. The struggle for decent housing is a global struggle, also aimed at creating competent authorities to combat the problem of these indecent housing.

The first social housing program was implemented at the end of the protectorate. It was then a program for the elimination of substandard housing.

Since then, several programs have been implemented, including giving priority to urban areas. However, these actions have focused people with incomes creditworthy low-income households are not the target of these programs.

– The Government, however – via a three-year structural adjustment – introduced RECOGNITION OF OCCUPATION IN THE SLUMS AND HABITAT IN NO REGULATION. The strategy of Urban Development Plans based on the principle of recognition by the state of occupation in slums and non-regulatory habitats, with the aim to develop these two forms of habitat improvements in infrastructure, access to basic services, the installation of community facilities nearby buildings consolidation and integration of people with employment and vocational training. Security of tenure would result in the clearing of the land situation and the provision of land titles to the occupants. But the results of these programs is very mixed …

– Based on these results, the approach taken has been replaced by a plan RESETTLEMENT OF SLUMS. This was to transfer slum to a developed site, transferring them lots equipped at a subsidized price to charge for beneficiaries to finance the construction of their homes without subsidy, or device for easy access to bank credit but sometimes with technical support. Again, the results are unsatisfactory, due to insufficient control of operations, or a recovery operation by public operators whose primary purpose is not the slum clearance.

– End of the ’90s, the government has launched programs of social housing, but they are for people with sufficient income (as owners or tenants), leaving aside the new precarious!

– Since 2004, the Moroccan government has launched a program called “CITIES WITHOUT SLUMS” (PVSB), involving all stakeholders more housing, including at the local level. This program involves the destruction of slums and rehousing of families. But this program showed a slowdown due to multiple factors:

– In spite of the establishment of a THREATENING THE HABITAT AGENDA RUIN, there is no comprehensive strategy, involving several factors:

– Urban growth has been the source of a “ZUN PROGRAM” in connection with the new towns. It is to propose new urbanized land in the outskirts of large cities. These lands are public or collective. Obviously, people with limited financial resources who live there have difficulties to find a job or to get to work (mobility costs) …

Sustainable housing in Morocco sends several parameters including the age of the housing stock to make renovations forcing, but also to sustainable building materials that are protected against weather and seismic hazards.

Traditional housing (medinas and Ksour) is often made from traditional materials, sustainable qualities, but not sustainable because the lack of maintenance quickly leads to degradation, these units no longer conform to safety standards.