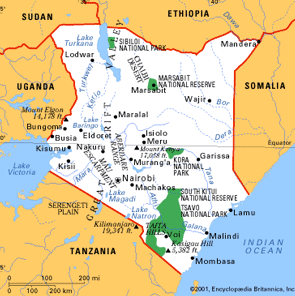 These problems are especially manifest in the low income areas in urban areas. Families live in inadequate, overcrowded homes typically with only one room and no windows. There are about 1,500,000 householders in urban areas in need of housing. (Habitat for Humanity).

In the rural areas the houses usually have mud walls, cow dung, dirt floors and thatch roofs. Based on the census of average household size of 4 persons. There are about 750,000 householders in rural areas in need of housing. (Habitat for Humanity)

Since 2010 : a NEW ConstitutionSince 2010, the Kenyan government has adopted a new constitution. In Chapter 4, we find affirmed the economic, social and cultural rights. The right to adequate housing are contained in Article 43 1 b. (but also freedom of expression and freedom of association) : “Every person has a right to accesible and adequate housing, and to reasonable standards of sanitation.”

Since 2010 promulgation of a new constitution,the governance structures in Kenya changed where 47 sub-counties were established each with its governance structures that is a two tier representation i.e Parliament and a Senate, each county has members of County Assemblies, a speaker and Governor,therefore housing planning and development are conferred as functions and powers of County assembly. (MUTHURWA RESIDENTS ASSOCIATION M.R.A.)

Article 2 of Kenya Constitution further states, any treaty or convention ratified by Kenya is applicable to the domestic sphere.

For the first time in Kenya, the inclusion of social and economic rights will enable people to benefit from judicial remedies and demand accountability from their government when these rights are violated!

Other legal provisions for the Right to Housing in Kenya

Large-scale evictions taking place in Kenya, particularly in the city of Nairobi. Beyond the reasons why these evictions, Amnesty International notes the procedure established in violation of the rights of people. An example is quoted as saying that the eviction notice that would have been thrown through the windows of a car circling the neighborhood to evict !

Many golf does not seem to have owners, they are generally considered to be a legacy of the British crown. Therefore, no claim these lands and no rent. If people staying in slums, are considered “without rights” legal decisions have no impact to avoid massive eviction. Source : Court of Eviction – 2013 Geneva.

According to BUNGE LA MWANANCHI, the main cause of evictions in Kenya are the private developers who bribe land officials, grab land then evict the occupants forcefully. Most of the victims of forced evictions report these cases to social movements for assistance and way forward.

“In a landmark case petition No.65 of 2010 residents of Muthurwa estate had instituted in 2010,stopping evictions and demolitions of the colonial housing they reside in.Twelve days ago on 18th-December,2015 Justice Isaac Leonora,ordered for hundreds of Muthurwa residents to vacate these houses on or before 30th/April/2016. Thus the timing limitation in filling for a successful appeal given technicalities and legal conflicts, my community held a major procession and presented the citizens petition on appeal to the Office of the Chief Justice, copied to the President and the Attorney General on Christmas eve. Over the recent years evictions have been targeting poor neighborhoods,to an extent the trend has grown towards indigenous people land and forested areas. In 2011 despite having a new constitution in Kenya about 3,800 Syokimau people faced a forced evictions carried out by Kenya Air port Authority,which claimed had court orders to evict houses which were on flight path. Five years ago over 30 villages were evicted in Garrissa region,in Mau Forest thousands of people homesteads were demolished by Police in collaboration with Kenya Forest Service wardens. In Athi River County residents of Kisumu Ndogo slums earlier this year were forcibly evicted after a Machakos Chief Magistrate granted orders for evictions. In Muthurwa court case a landmark ruling by court directed that the government must adhere to international standards on right to housing thus the court directed the Attorney General to issues the court on evictions guidelines bills”

The whole of chapter 5 in the Kenyan constitution is about Land and Environment :

Other legal provisions for the Right to Housing

Following the land reform under the new Kenyan constitution (2010) and in connection with the National Land Policy (2009), new land laws have emerged (2012). Pending in President office is Community Land and Eviction, resettlement Procedure Bill waiting for enactment into law.

A new Land Code was created in 2012, among big changes should be noted:

According to BUNGE LA MWANANCHI – 2016, “Land grabbing in Kenya is a crisis, daily cases of land grabbings are reported both at a small scale and large scale, the causes vary from commercialization to exploration to development to land speculation.We as a social movements have a lot of campaigns against land grabbing and forced evictions.”

According to MUTHURWA RESIDENTS ASSOCIATION M.R.A. – 2016, “in 1990s in Kenya, the Late Nobel Peace Prize winner Prof. Wangari Mathaai stopped the entire President Moi government from grabbing and developing a 30 story building owned by the Times. Company within Uhuru Park gardens a 120 acrea of recreational space within Central Bussiness District. While schools play ground have been recently a target for land grabbing during Martin Luther King Jr Day.In Kenya the mighty and influential key government figures were involved in land grabbing of Langata Primary School, thus the interventions of social movements and online activism assisted in stopping the land grabbing. Open Spaces in the urban centers have not been spared either, we have witnessed recreational spaces being targeted. To face eviction, social movements must : be able to have a timely research on the land at hand, the mode of ownership and leaseholds, plus the accrued levies owed to the government and the county governments. Map and flag all open spaces, recreational facilities, historical monuments and shrines.”

In urban areas, there are 84% to 16% renters owners. Households spend more than 30% of their income on housing and access to housing credit is very difficult. The houses are owned by 15% of the residents in Nairobi.

One in three people live in urban areas and urban planning has not been able to anticipate such a demand for housing. These are 150,000 new homes are required each year in these areas, and only a quarter of the demand is met.

In rural areas, there are annually about 300,000 dwellings would need to be renovated.

Lack of housing, informal settlements have settled in slums. According to some researchers, 60% of Nairobi’s population reside in slums. On average, it is then 5-7 people who sleep per single room.

Besides all the problems related to a lack of financial means and accommodation (loss of employment, access to health care and education), the most marginalized groups – consisting of women and youth – are the first victims AIDS.

“Slum upgrading is slow and under-resourced, and slum residents complain that they are not being inadequately consulted about the upgrades they require. The government has yet to develop a slum-upgrading policy.

Security of tenure is a fundamental requirement for progressive integration of the urban poor in urban areas and a basic component of the right to access adequate housing.

In 2006, the government pledged to issue national guidelines on evictions. It has yet to approve the draft eviction guidelines recently developed in consultation with civil society, and has refused to stop forced evictions until the guidelines are in place.”

Role of civil society : “As a social movement, we organise these communities to form and establish residents associations to advocate for proper housing rights . this has given birth to very strong associations e.g the Muthurwa residents association. Our campaigns have also pushed the goverment to start various slum upgrading projects.” (BUNGE LA MWANANCHI)

According to the constitution of Kenya its the mandate of the government to facilitate proper housing with adequate sanitation for its citizens who are the tax payers. But, according to BUNGE LA MWANANCHI : “In Kenya we have very good policies on paper which are never implimented.”

“When the trash will cease to be a problem for the population” … A unique experience in South-East of Nairobi: a turbine is installed, running garbage. 15 tons of garbage produce 12 megawatts of power. It is located on 28,850 28Km2 concessions that benefit from this energy. Source: Fiche Africa Governance website

According to Amnesty International :

According to BUNGE LA MWANANCHI :

According to MUTHURWA RESIDENTS ASSOCIATION M.R.A.

According to BUNGE LA MWANANCHI :

According to MUTHURWA RESIDENTS ASSOCIATION M.R.A.