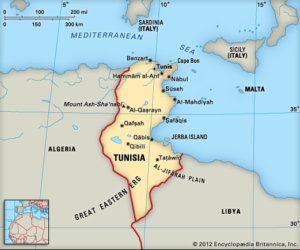 “Country formerly urbanized Tunisia whose urbanization rate was 28% in 1925, has now reached 64.8%, according to the 2004 census. With a population of just under 10 million people in 2004, and a capital of 2.250.000 inhabitants, Tunisia has experienced over the last forty years many changes. Beyond the quantitative aspects, major changes have characterized the evolution of urbanization. These changes, although barely perceptible at the urban, have arisen in the spatial organization of cities, and the level of their socio-economic content and social practices of their inhabitants. ”

“Since independence in 1956, the population of the city of Tunis has been multiplied by five and six in its territory. Housing policy of the middle classes initiated since the mid-1970s ignored the poorest who are relegated to informal settlements on the periphery. ”

– The primacy of the capital

After a sharp increase in population between 1900 and 2004 resulting in urban sprawl (120,000 inhabitants in 1900, Greater 2,250,000 inhabitants in 2004), Tunis begins to have a population that tends to stabilize. This “moderate growth” is mainly due to the government policy of declining birth which was implemented early 1965 to the end of regulating population growth being experienced in Tunisia. Another important factor is the decline in net rural-urban migration

“In addition to the sharp drop in the birth rate, moderation of urban growth is also attributable to the decline of the rural exodus due in particular to a better distribution of educational facilities and employment at the regional level, as well as a stabilization of population, due to the wide dissemination of policy ownership tenure, initiated in 1975. Despite its moderate growth, Tunis remains nonetheless a primate city as it boasts 22.7% of the country’s population and is a little less than 5 times the population of Sfax, the second city of Tunisia, with only than 460,000 inhabitants. Character Primate of Tunis is historically linked to its role as a hub of trade and investment concentration, responsible for the polarization of the national space and attractiveness of migration flows in the capital. This primacy of capital also reflects the concentration of decision-making authority and centralization of Tunisian political and administrative system.”

– The predominance of medium-sized towns

“The Tunisian municipalities ranging in size from 20,000 to less than 100,000 are number 74 and account for 46% of the municipality. Although small municipalities (<20,000 inhabitants) are the number of 178, they account for only 22% of the population and communal represent the vast majority of rural communities. These quantitative characteristics show, like other urban systems in developing countries, the predominance of the capital city and the concentration of coastal cities and towns.”

A new constitution was approved by the National Constitutional Assembly on 26 January 2014. The right to housing is not registered.
Art.13: “Natural resources are the property of the Tunisian people. The state exercises sovereignty over these resources on behalf of the people. Operating contracts for these resources are subject to the Commission specialized in the Assembly of People’s Representatives. The agreements about these resources are subject to the Assembly for approval. ”
Art.24: “The State protects privacy, inviolability of domicile, confidentiality of correspondence, communications and personal data. Every citizen has the right to choose their place of residence and to move freely within the country and the right to leave him. ”
Art.41: “The right to property is guaranteed and can not be worn with his person except with the guarantees provided by law.”
Site on legislation in Tunisia : http://www.jurisitetunisie.com/

In Tunisia, there are two titles:

According to the article in Revue Etudes Foncières (2)

During the ’70s, the Tunisian city centers are depopulated in favor of the peripheries. It is in this context that in 1973, the Tunisian government will create AGENCY LAND OF HABITAT‘s mission is to “promote access to housing for all segments of the population and particularly to households low and middle incomes.” The agency knows little difficulty acquisition until the 1990s, when the right of expropriation will be difficult to implement in light of past abuses. Thus planning public through AFH increased land in production, 33% in 1980 to 14% in 2004.

The land will be developed and piecemeal, without the right soil is always respected. Urban planning is limited to areas already built. Private developers have difficulty obtaining a land area of extension, the public sector itself useful for exceptional procedures (Perimeters Intervention Land – PIF).

It is therefore in Tunisia, three modes of productions from the 70s: the public sector – the sector private legal – illegal chain. This last sector is characterized by the fragmentation of land without servicing by their owners who sell their agricultural plots to smaller populations.

According to the authors, the Revolution should open outlook to the extent it challenges the established model and legitimacy of public power in terms of land development.

Testimonial : “Economic uncertainty, the deterioration in household purchasing power, unemployment, and wage freezes have accelerated and increased movements of protests, strikes throughout the country during the 4 years of governments that have Successive (…) Poverty and the precariousness of households reached a threshold such that some households have lost their homes for failure to pay their bills and bank loans, factories have closed due to the growth of taxes imposed . The unemployment rate reached 30% over the years, with women accounting for 2/3. Violence against women has increased taking unusual shapes, such as circumcision of girls, cases of rape and verbal, physical and psychological (…) An imbalance as the Tunisian company s’ is seen forced to multiply and strengthen the protest movements, demonstrations, denunciations in the street, everywhere from north to south and from east to west, before the abuse, attacks and the campaigns of demonization made by the militias of the Islamist party Ennahda against the art intellectuals, artists, journalists, teachers – oresse, lawyers es, actor-rices, actor-nes, activists and militants es of civil society, students with destroying galleries art, attacking bookshops and prohibiting the sale of certain books considered forbidden by Islamic law (…) “(Soha Ben Slama – IAH) (4)

In the 70s, alongside new public policies implemented to increase housing, will develop spontaneous suburban habitat (Chabbi 2005). Originally developed on public land – this is no longer true today for the most part – these structures grow illegally, without building rights. Importantly, these developments do not receive a posteriori basic infrastructure through a dedicated government agency, the Agency for Rehabilitation and Urban Renewal (ARRU) and dealer networks. This type of development accounted for 30% of the urban area of Greater Tunis (and about 20 and 30% of the housing stock in the country at present) in the early 20004. If its development seems slow, it continues to supply a significant urban sprawl, as evidenced by the case of the capital. (2)

Some Tunisian families, due to housing problems began **squatter** housing belonging to the National Building Society in Tunisia. The latter initiates actions to recover these units. Source: Info Turess Website.

During the ’70s, the Tunisian city centers are depopulated in favor of the peripheries. It is in this context that in 1973, the Tunisian government will create

This policy has enabled the production of housing for people creditworthy, that is to say the middle class. (2)

After tourism and finance, central bankers from the Gulf focus on Tunisian real estate. A large housing construction program “social” is underway. In 2012, it is estimated that the social housing stock is 2.8 million housing, which is still insufficient given the needs of the population. Source: Frida Dahmani, Jeune Afrique, 2012.

Despite a high potential, particularly in terms of solar water heater, Tunisia is struggling to reduce its footprint in the housing. Control of environmental technologies and the low cost of fossil fuels (Given the current price of conventional energy for the user in Tunisia, the solar water heater is not actually competitive with LPG water heater , natural gas and even electric water heater.), pose problems and slow the progression of renewable energy.

To revitalize the dynamics, the Tunisian government launched in 1995 a program for the dissemination of 50.000m ² of covered area. This policy has been possible thanks to the Global Environment Fund.

The program, called PROSOL (Programme for Promotion of Solar Thermal Energy Plant) was very supported by the Tunisian government. Reduction targets for GHG nothing at the level of the habitat, will significantly reduce the impact of these emissions on the environment. The economic impact would be significant. The jobs in the cities that have chosen this method of heating should be affected: “On the social level, the jobs that will be created in the program for 2009 can be estimated at more than 2000. The social value of these jobs is even more important that they are essentially local jobs, created in the regions by the activity of installation and after-sales services. ”(3)

Following the First Assembly of the Right to Decent Housing (Tunis, 2013), participants from civil society have made the following recommendations: